This item is a letter, written from my persona, Alessandra Torrigiani d'Arezzo to her sister-in-law Lena. The content deals with the history of the Torrigiani family and my persona.

The style of this letter is taken from the writings of Italian women humanists in the fifteenth century. Typical elements of the letters that this is based on included classical and biblical references (not really used as this is more of an informal piece), protestations of general unworthiness especially by women writers, praise of the recipient of the letter as well as a general striving for elegance of tone. One letter by Cassandra Fedele deals with the history of her family, but is set more a more formal relationship of appeal fro patronage. I have found pieces of family letters written by the Strozzi family, between Alessandra Macinghi Strozzi and her children, some of whom had travelled away from Italy. These letters seem to include more advice and descriptions of places and people encountered than the more formal humanist letter.

The structure of the letter is based around the components of Salutio (greetings), Benvolentiae Capatio (securing of goodwill), Narratio (the body of the letter), Petitio (request), Conclusio (conclusion).

The layout of the handwritten version of this is taken from the picture of a letter from Thomas Betson to Sir William Stonoe, in 1478.

Though English, this is the only reproduction of a written letter I have found. In this letter, gaps were left at the top and left hand sides of the page, while the text was written in a block format. To create the style of a spontaneously written letter I have deliberately not planned words in relation to one another, thus there is some overlap between the lower bits of some letters, and the top bits of the next row. I have even included some properly period style spelling errors.

The script I have used is Italic, which was in use by this time, for business and communication, as well as more formal scribal work. Again, because of the informal nature of this piece, I have deliberately aimed fro a non-professional look to the script.

The materials I used were an 'imitation sheepskin' paper, and Mitchell size 5 nib, and Higgins Fountain Pen India Ink. In period, these materials would have been parchment, a quill pen, and ink made from oak gall or lampblack. I made these substitutions on the basis of affordability, availability and practicality (i.e., what was around the house, or easy to buy, and that I could use).

For full references, see my Introduction, and attached bibliography. 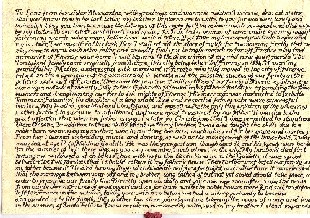 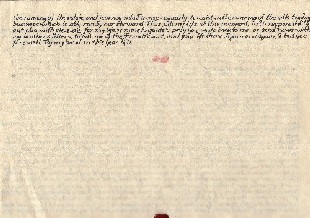