Illumination in the Style of the Manesse Codex 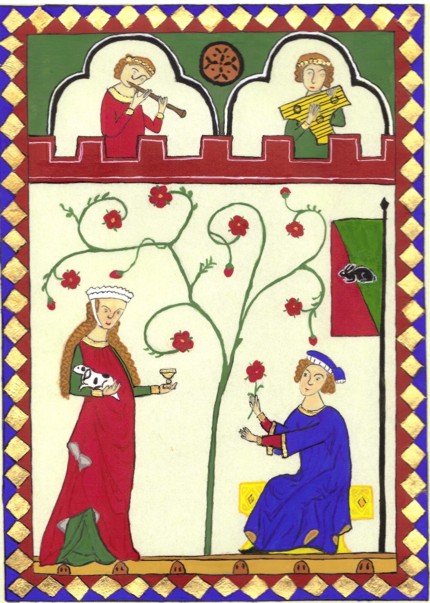 The Codex Manesse or Grosse Heidelberger Liederhandschrift was written in the early 14th century and is the most famous German Illuminated Manuscript of the Middle Ages. Written in Middle High German, it is the single most comprehensive collection of courtly lyric poetry or Minnesang of the gothic era.

The term for these poets is Minnesanger a combination of the words minne [love] and sang [song], as in those times, these poems were mostly presented in the form of a song.

Representing the work of 140 poets from the 12th to 14th centuries, several of whom were famous rulers, the codex was the work of at least 4 illuminators and a dozen scribes over a 35 year period. It has been supposed that the Minnesanger Johannes Hadlaub, who is also represented in the codex, was responsible for compiling the collection of poetry at the request of several of Zurich’s leading families, including the Manesse family after whom the Codex is named.

There are 137 full-page miniatures, including 1 pen and ink drawing.
The designs were first drawn on the grounded parchment with black ink, and then the painters evenly applied the colors. These miniatures depict each poet in the Codex, giving us his name and rank and representing them in an idealized form of battle or courtly activity.
The entries of the codex are ordered in sequence by the rank or social status of the poets, beginning with the Holy Roman Emperor Henry VI, then Kings, Dukes, Counts, Knights and commoners.

Through my examination of the Codex, the manuscript appears to have been completed in two sections. The main illustrator of the earlier pages has been identified as the Foundation Master [1]. He is credited with 110 of the miniatures by the use of similar styled borders of blue, red and gold.

Typical of the Foundation Master are his figures, drawn in accord of the late High Gothic ideal of beauty, with their slim features and archetypal faces shown in three-quarter profile, surrounded by golden locks. His borders consist of simple geometrical design, double or triple framing in blue, red and gold and his use of unmixed, powerful colors have lost none of their brilliance over time, with vermilion, blue, green and gold dominating the palate.

There is then a change in the miniatures towards the completion of the manuscript and therefore credited to at least three other illustrators. Though they contain the same main elements of the earlier pages they are painted with pastel colours and are illustrated with party colour clothes and have floral or architectural borders. Also, their placement in the Codex appears to have been done after the main book was completed, as these new pages were inserted to maintain the rank order of the minnesangers.

The miniatures of the Codex Manesse differ from other contempory manuscripts in that the classic authors’ portrait is not used. Generally, figural portraits were depicted as writing, performing or in mediation, as in the Gospels, limiting the expressiveness of the subject. The miniaturists of the Manesse however did not limit themselves to this convention, showing them as armed knights fighting, hunting or enjoying courtly entertainments with the ladies they adored, playing games or in fond embrace.

Throughout the codex miniatures there appears a series of symbolic icons, representative of the authors, scepter for a king, sword or banner for a knight, scroll for a bard or sometimes no icon. Also, many depict a coat of arms and helm, however since the manuscript was compiled up to 100 years after the death of some poets the heraldry for most cannot be regarded as authentic.

Illumination in the style of the Codex Manesse

I started by pre-designing my illumination, examining the miniatures of the Codex Manesse and writing down what common elements were used throughout the manuscript that I also wanted to use. I then drew a short-hand design of what I wanted it to look like. I chose several recurring elements from the miniatures of the codex to create an individually unique illumination, an extension of the codex rather than copy. The elements I chose included the type of border, architecture, clothes and symbols, such as the dog [for fidelity] and the rose tree [for love].

There are two very different themes within the Codex, the first theme includes the scenes of battle or of knights in tournament, the other theme is of more noble or courtly activities. My preference is for the second and I have chosen to base my design on one of courtly love.

Once satisfied with what elements I had chosen, I drafted those ideas onto my parchment page, using a measured rule to divide the page. I have chosen to do my illumination full scale to the originals to get a better idea of the working scale and therefore my page is 355mm by 250mm with the actual illumination being--------
in dimensions.

I used a ruler to draw in the border and other straight lines of my illumination and then in freehand drew the other images, trying to maintain the same scale throughout. The first draft was done in pencil and then outlined in ink, just as the originals appear to be. This can be seen in the one unpainted image in the codex as well as in the other unfinished illuminations.

Using gold leaf and gouache paints, which closely resemble period paints I have created my palette of colours in the hope of achieving the same dynamic colouring in my illumination as I have found in the original codex.

University of Heidelberg
http://digi.ub.uni-heidelberg.de/diglit/cpg848/
permission to use pictures granted