» Arts and Sciences » Costume and Sewing 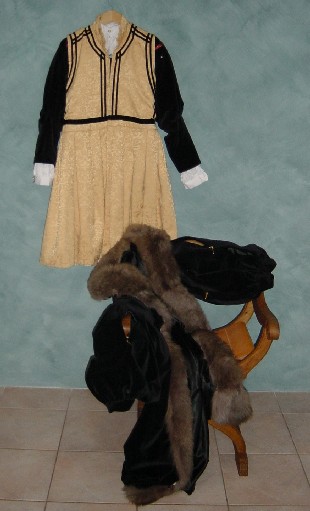 This outfit is based on a number of different sources.

The hose are pointed (attached to the doublet with lacings), and are made from a fine wool. Ideally the hose should stretch more to obtain a tighter fit. However I was unable to find suitable fabric. Most hose were closed-legged at this time, as can be seen in Holbein's Signboard for a Schoolmaster, 1516 (Buck 1999: 12). Although in many Tudor portraits the codpiece is large and prominent, no such prominent codpiece was evident in the portrait on which the jerkin was based. Thus this outfit has a smaller codpiece.

The shirt is made from a light cotton, and is constructed with the arms pleated into the neckline to provide many small pleats, as can be seen in many examples of art from the period (Buck 1999).

The doublet laces at the front, and the arms and sleeves are based on a common Tudor design, which can be seen in Holbein portraits and sketches (buck 1999: 53 & 55). It is made of velveteen, as a lower cost and roughly period looking version of period velvet.

The jerkin is based on a woodcut by Durer, part of his dances with Death series, and the length of the skirt betrays its German origins. The high collar can be seen partially open in this picture, showing the lacings. It is made from a gold jacquard, interlined with cotton for rigidity and bulk, and lined with satin (synthetic, but a reasonable approximation of real satin). The method of tying the satin sash can be seen clearly in both the Whitehall mural (Fraser 1996: 161) and in Holbein's famous portrait of Henry VIII (Fraser 1996: 99).

The velveteen half robe should actually be entirely fur lined, but due to budgetary constraints and considerations of the Lochac climate, this one has only fur edging. The fur is grey fox.