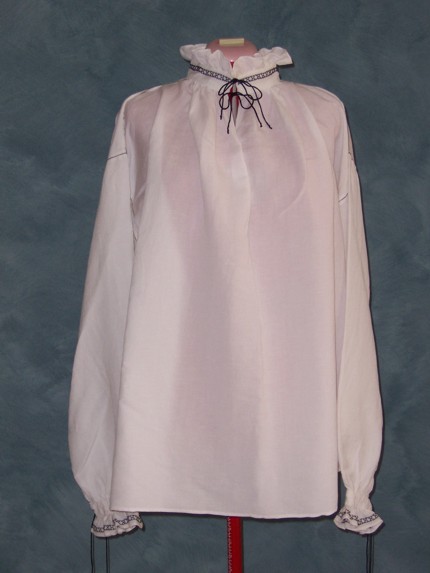 Shirts such as this were an essential part of a man’s wardrobe throughout the sixteenth century. There are several shirts of this period still in existence and many detailed portraits showing parts of the shirt so we have a very good understanding of how these shirts were made.

They were almost always made of white linen for several good and practical reasons. Linen is the easiest of the available fabrics to wash which is important in clothing worn against the skin. It is also comfortable against the skin. However, it is not easy to dye and colours fade quickly, even with modern dyes. It does bleach well in the sun and the white provides a nice contrast to the bright colours favoured for the outer layers of clothing. There were several grades of linen available at this time. Cambric and holland were preferred for good quality shirts with cambric being finer and whiter. I have used a fine, even weave, white linen of about 22 threads per cm, similar to those examples which have survived from at least the thirteenth century and through the Tudor period.

The pattern for this shirt is similar to the ones described in the Tudor Tailor and in the Tudor Shirts article. It was constructed of rectangles and triangles, wasting as little of the fabric as possible, as shirts had been for centuries before. The pattern for sixteenth century shirts is, however, a lot more complex than in previous centuries. The body is made of two rectangles, one for the front and one for the back. The sleeves are also rectangles. There is a 15cm square gusset under the arm to allow movement. There are also small triangular gussets in the shoulder seams where they meet the collar. I would never have thought of including them on my own but they are visible in the surviving shirts and they make the collar sit so much better. The sleeves are gathered or pleated into bands at the cuff with or without a frill of varying size to finish. The body panels are joined at the shoulder from the side to the width of the shoulder leaving a very large neck opening which is gathered or pleated into the neck band and usually finished with another frill of varying size, not necessarily the same size as the wrist frill. Gathering the neck in this fashion gives a lot of fullness while allowing a nice smooth shoulder seam to sit neatly under the outer clothing. All of the linen pieces were cut along a drawn thread to give a neater edge which would hold a smaller hem. 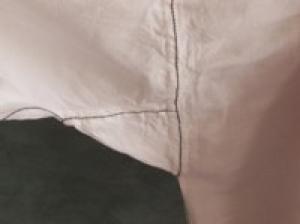 Linen garments were sewn with linen or silk thread. Silk is much nicer to work with so I chose that. The usual way to assemble a shirt is to backstitch the seams (running stitch is also a good option, but backstitch is stronger), then finish the raw edges by turning them over and sewing them down (both edges away from the seam or both to one side like a flat felled seam or both in towards each other like a French seam).

I kind of did it in reverse. I hemmed all of my pieces with a narrow double fold hem using white silk thread then joined them together with a buttonhole stitch in black silk thread. Oversewing two hemmed or selvedge edges together was a method used for garment construction and it is quite sturdy. Buttonhole stitch is a variation on oversewing. It was widely used for lacing holes and button holes but I have not seen it used for joining pieces together. This method takes longer than backstitching then finishing the raw edges but I prefer the finish it gives. 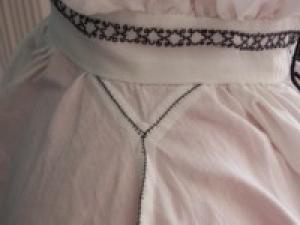 The buttonhole stitching was an important part of the design of this shirt. The surviving shirts all feature a greater or lesser amount of decoration. The decoration was usually bands of blackwork in geometric or botanical designs executed in black silk thread (occasionally coloured threads were used). The bands almost always covered the seam lines. I don’t much care for embroidery but I don’t mind hand sewing. The buttonhole stitch was a combination of simple decoration of the seam lines with necessary construction.

Blackwork decoration was also applied to the collar and cuffs of these shirts, sometimes in great quantity and detail. It varies as to whether the embroidery was done on the frills or the bands, collar band and wrist frills was a common combination. That seemed the most practical for this shirt. The embroidery was done by Catalina da Gata and was based on a pattern from a contemporary Spanish portrait, which is appropriate since blackwork was rumoured to have been introduced into Tudor England by the Spanish Princess Catherine of Aragon, Henry VIII’s first wife. 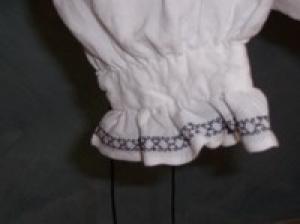 Most of the extant shirts from this century and those shown in contemporary portraits used ties to close the neck and wrist openings though buttons could also be used. The ties were often white to match the shirt or black to match the decoration and were also made of silk. There are several ways to make a cord suitable for this purpose. Fingerloop braining, lucet cording and plaiting all are useful techniques. The ties on this shirt were lucet corded. This technique produces a very strong cord (several times the strength of similar sized leather). Its square cross section and surface texture allow it hold knots well so the otherwise slippery silk will stay tied.

There are two pairs of ties on the neck band and one on each of the wrist bands as shown in many of the period examples. The collar sits better when tied in two places; the wrists tend to be held in place by the oversleeve anyway. 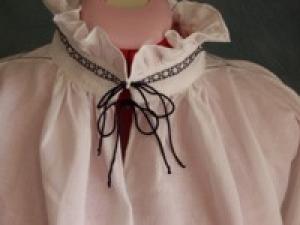 The ties are finished with aglets partly for decoration but also to protect the ends of the cord which will unravel very quickly otherwise. Aglets can be made of tubes of any of the metals in common use at the time; gold, silver, brass and pewter all having been used as well as gilded brass like these. They are glued into place. The glue holds more by swelling the fibres of the cord to make a very tight fit than through the adhesive properties of the glue.

This shirt looks simple but it took longer to make than my first complete Tudor outfit, including the corset and farthingale. The lucet cord alone took about four hours to make.

Aston, Margaret (ed) (1996) The Panorama of the Renaissance, Thames and Hudson, London