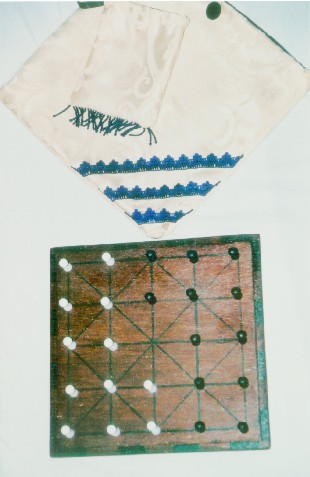 This game is found, illustrated and described, in the Alfonso X manuscripts of the 13th century under the name Alquerque, it was brought by the Moors who called it el-quirkat, mentioned in a 10th century Moorish manuscript. It was also played many years before in Egypt and the Middle East where Game boards were found carved into Egyptian temples roof slabs dating back to 1400 BC.

It is basically an early form of checkers. Each Player has 12 pieces, arranged on the board according to the Illustration (see attached). A coin can be tossed to decide who will go first. A piece can move in any direction along the lines, (forward, backward, sideways or diagonally) one jump at a time or jump an opponent's piece. The piece can continue jumping until no more jumps can be made. If a player chooses not to jump when it has the chance to do it, the piece will be huffed, or removed, from the board. The game is won by the person who removes all of his opponent's pieces or who has the most pieces when no more moves can be made.

The Board:
1. Bought a thin piece of plywood and had it cut to size, and glued the pieces together (father in law cut the board)
2. Sandpapered the edges of the playing board
3. Varnished with a walnut stain
4. Painted the decorative and playing lines
5. Painted a sealer over the board

The Playing Pieces:
1. Bought decorative dowels, cutting and sanding off ends to create the playing pieces
2. Painted the Playing pieces, white and black

1. The sealer gummed up a bit, so have little specs over the game board.
2. I think the stain was a bit too dark.
3. Otherwise, looks similar to the original, though I think the lines were cut into the wood originally not drawn on, hard to tell.

Botermans, Jake ... [et al.]. The World of games: their origins and history, how to play them, and how to make them