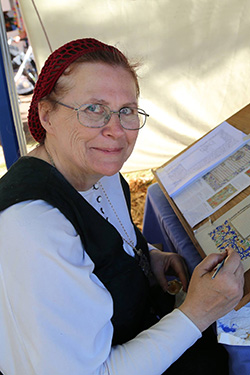 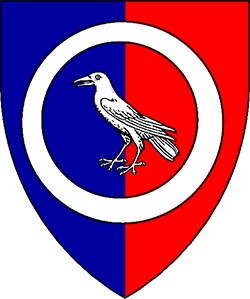 Branwen of Werchesvorde is a Scribe of a non specific period between 900 to 1600AD. I like to be various ‘ancestors’ in different periods and in different countries and cultures.

Originally the family started in North East England around the time of the Anglo-Saxons. My father was a Merchant who fell in love with a Welsh lass and brought her home to Warksworth.(later re named Werchesvorde)

They had a daughter, Branwen, meaning white bird in Welsh. Mother (Siwan) died, leaving my Father (Bran), to raise me. I showed and early talent for drawing and seeing an opportunity, my Father had me educated at the local monastery (Lindisfarne) to learn numbers, read and write in order to help him with his business. Unknown to him I discovered a passion for Illumination. As the coast was constantly under threat from the Vikings he decided to take me with him. I kept records of the business and over the years we became very prosperous. We travelled to the Far East where I discovered a young man, a Turk, who was a great archer and fighter. Kilic became a caravan guardsman on many of my father’s ventures.

As well as calligraphy and Illumination (Master Scribe in the College of Scribes) my other interests are cooking (Master in the Cook’s guild), embroidery, sewing, tent making, leatherwork, weaving, and a real lot of other stuff I don’t have time for.

Per pale azure and gules, a raven within an annulet argent.