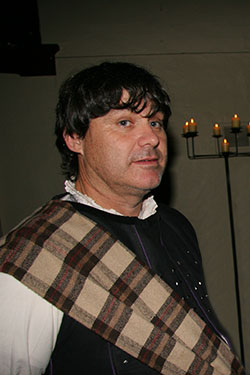 I was born around the mid sixteenth century in the village of Loubet on the Mediterranean coast of France, not far form the border with Italy. My father was the local brewer and I can still remember the foul stench of the brewing.

My mother was of Italian descent and I was named in honour of her grandfather, Hadrian.

When I was just six years old my life changed suddenly.

I was helping my father and my two younger brothers push the cart of ale to the local tavern, when up ahead there seemed to be some shouting. A very noble looking Lord on a grey horse was surrounded by some of the local vagrants who were trying to steal his pouch. I was very frightened and father told us to hide under the wagon until he returned.

There was much noise and shouting.

Sometime later the Lord was peering at us under the wagon, and my mother was there next to him sobbing. My father had been killed bravely attempting to protect the Lord from the bad men.

My mother told me I was to go live with the Lord, who, in return for my fathers bravery, was to raise me in his household as his own, as he had no sons, and I was one day to be his heir.

I was very fortunate that Lord Guido was a very honourable man and treated me kindly. I was schooled in reading and writing, and also in the art of the sword.

When my benefactor died I inherited all his holdings, and now am very comfortably able to divide my time between my various homes in Nice, Florence and Venice.