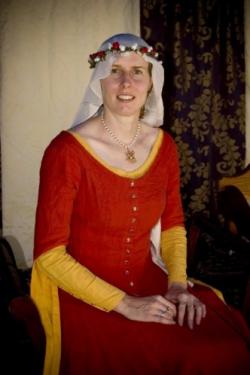 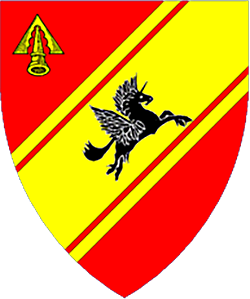 Baroness Catherine is an English noble woman from the late 14th century. She is strongly influenced by the fashions, food and culture of both England and France. Due to the war with France and now turmoil with Scotland Catherine has often been left to maintain the estates and home while her lord takes part in the wars. She has learned to rule the house and lands with determined efficiency, very few are unwise enough to cross her.

Catherine's strength is tempered by a love of the arts with her taking part and regularly teaching a variety of dance, music and textile crafts.

Gules, on a bend sinister cotised Or a winged unicorn courant contourny sable, in canton a pheon inverted Or