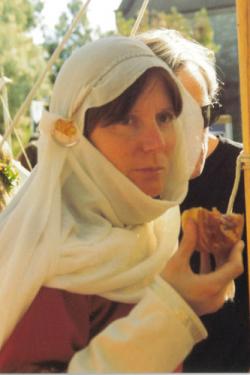 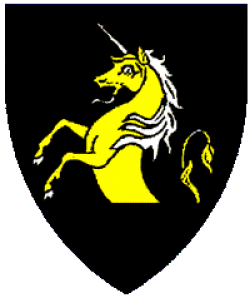 Rhianwen was caught by a Saxon Lord on a Raid to her home land of Ireland.... She now manages to wander the timelines and prefers to live in the 13th Century rather than the 10th or 11th centuries.... She has an interest in food, beverages and setting a good table, calligraphy and illumination, and is attempting to learn about a number of other things; shoes and headresses in particular OH and jewellry as depicted in some of the Flemish paintings.

Sable, a demi-unicorn rampart Or crined and horned argent