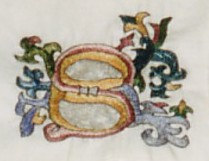 Embroidery has shown to be an effective and long used method of decorating textiles since very early in humankind history. As time progressed, patterns, stitches, thread quality and so forth improved and became more complex with many beautiful pieces of artwork that still survive today. This small piece of embroidery was created to demonstrate the effective use of colours and stitches in creating a piece of work.

The fabric on which the work is created is cotton lawn. Whilst not a common fabric in the late 16th Century, it was used by those that could afford its exorbitant price. It was in Italy by the early 13th Century, brought there via trade with the Byzantium empire1. Cotton lawn is seen as an acceptable substitute for linen, as it has an even weave, creating the wanted even finish.

The threads used are again cotton, mostly due to the common availability and that silk thread is at present out of my price range. Silk and metallic threads were commonly used in the decoration of fabrics but it was no unheard of for cotton embroidery to exist.

The stitches are two types: stem stitch and split stitch. These were both commonly used stitches in embroidery, for both outlining and filling2. Stem stitch provides an even thin outline, which is easy to fill. The split stitch is an excellent filling stitch, allowing for the delicate blending of colours.

The design is a letter 'S' from a 13th Century music manuscript in a choir book designed by Fra Angelico1. This design is not a common element of late 16th Century embroidery, but it was chosen because it is to be used as a favour, the letter 'S' being the first of this authors name. Letters were commonly depicted in embroidery, as is seen in the Bayeux tapestry4 and many others, but those letters were often monochrome thread representations of the calligraphic work common of the age.

The procedure for transferring and working the design was thus:

1. The cotton lawn was cut and hemmed by hand with white cotton thread.

2. The design was first transferred to paper from the book, removing unnecessary artwork not used in this work.

3. The design was traced with black charcoal, a rather messy but effective procedure.

4. By pressing the fabric onto the paper the charcoal was transferred over, leaving an imprint of the design on the fabric.

5. The outline was completed in stem stitch then the rest filled in with split stitch.
6. The completed piece was washed gently to remove leftover charcoal and to soften the work, then dried and gently pressed.

So, even though the design is not strictly ‘period’, the correct fabrics and techniques have been combined to show that thread work is just as effective as paintwork in showing off the beauty of an illuminated letter.

1. Manny, F The Uses and Availability of Cottons in the 16th and 17th Centuries in Europe