Welcome to the World of SCA Combat 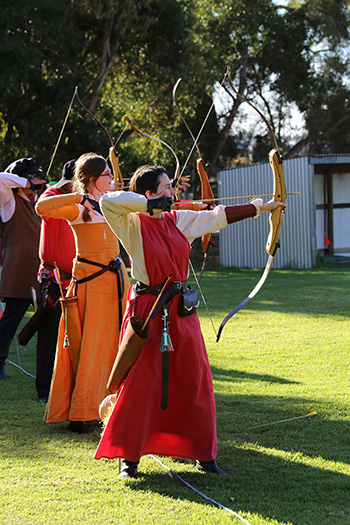 One of the most important activities in the Middle Ages, archery is also an integral and very popular part of the SCA.

We shoot target archery with sharp arrows plus we shoot combat archery at armoured people with rubber blunted arrows. Target shooting can be at fixed targets at varying distances or at more elaborate targets such as mixed animal targets mimicking what a medieval archer might have faced while out hunting. SCA archery is without sights or modern compound bows, instead we are focusing on more period traditional shooting with wooden arrows and feather fletches.

Combat archery allows armoured combatants to safely compete in what is often described as medieval paint ball. We have rules that govern bow and arrow requirements and armour to ensure safety. Combat archery is usually at our larger war events and requires team work, a good sense of what is happening around you and the skill to hit a moving target.

Our training is held on Sunday mornings from 10am to 12pm at Lake Monger Primary School. Contact our group Marshal for more information. 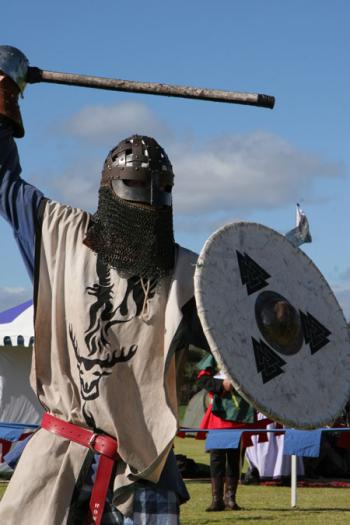 For those aspiring to be a medieval Knight in Shining Armour, SCA combat is exactly what you’re looking for. Weekly training sessions will help you build the skills needed to seek and win honour on the tournament field or at war.

Armoured combat in the SCA is a full contact marshal art with combatants wearing real armour fighting using weapons made from rattan cane.

We hold regular tournaments where you can pit your skills against others. Most local tournaments are single combat where individuals compete each against another, advancing in the tournament with each win. We also hold melee events where teams compete. In melee the skills and tactics of working together become more important than having the best individual fighters. The largest combat events are our wars with fighters filling 2 sides all taking the field at once, the energy and excitement on the war field is hard to match. Our war events also include combat archers along side the armoured fighters. Dodging blunted arrows takes a new level of awareness to survive.

Our combat is governed by rules and armour standards, these can be found in the Lochac Fighters Handbook.

Our training is held on Sunday mornings from 10am to 12pm at Lake Monger Primary School. Contact our group Marshal for more information. 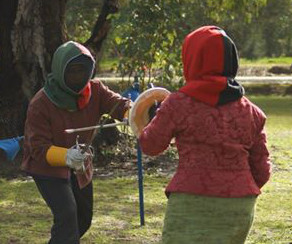 The clash of blades; swashbuckling with swords; cloak and dagger! SCA Rapier Combat brings to life the arts of sword fighting from the 15th and 16th centuries and is practiced with real bated weapons. Try your blade in tournament competitions or test your skills in the Royal Guild of Defence.

Rapier Combat training is held every Sunday at Lake Monger Primary School from 10am.